Editor’s note: As of 2018, the product is relaunched as BeoCreate. We have kept the name ReCreate in the article below to reflect the original development process.

In ReCreate, Bang & Olufsen employs a range of new techniques to make it attractive for their users to upcycle old loudspeakers, modify them and join a new community of co-creators. In other words, Bang & Olufsen’s users are no longer just customers but also co-creators of the product. But how does that work?

The ReCreate concept involves buying a unit consisting of a print board with a small computer chip (based on a so-called Raspberry Pi) that, with a bit of dexterity, can be fitted into an old passive loudspeaker from the 1970s or 80s, for example. The ReCreate unit adds Bluetooth functionality to the speaker, thus upgrading the old speakers with the wireless capacity of contemporary speakers. In this way, the users can upcycle their designer speakers, for example, from Bang & Olufsen, extending the product life cycle and continuing to benefit from their timeless design.

“Open source felt as an obvious choice for us. The open-source approach lets us encourage our users to become much more involved – in the true spirit of co-creation.” – Anders Buchmann, Chief Intrapreneur in Bang & Olufsen

The innovation does not end there, as the ReCreate unit is also an open-source device. Thus, Bang & Olufsen (and their manufacturer, HifiBerry) not only allows users to modify and extend the functionality of the unit but actively encourages it by publishing the ‘recipe’ for the product and releasing it under an open-source licence. The licence describes a set of rules that makes it legitimate for anyone to deconstruct and expand the product – without asking permission and without paying royalty fees to Bang & Olufsen; in return, the modifications must be made public and released under the same licence, thus generating added value for Bang & Olufsen and all other hi-fi enthusiasts all over the world.

ReCreate was developed by Bang & Olufsen’s innovation department, BeoCreate, which operates on design-driven principles. Taking a highly user-oriented focus, BeoCreate’s work proceeds in iterative processes cycling between observations of the market and users, efforts to interpret and understand the uncovered user preferences and efforts to come up with new solutions to match these requests.

As part of the development effort BeoCreate also took part in a test of the Danish Design Centre’s REMODEL programme, examining the mechanisms behind the creation of global communities of co-creators rather than traditional communities of consumers.

This experience also made it a natural choice for the company to embrace and experiment with open-source principles.

Anders Buchmann, Bang & Olufsen’s chief intrapreneur and a co-founder of the BeoCreate innovation department, says, “Open source felt as an obvious choice for us. The open-source approach lets us encourage our users to become much more involved – in the true spirit of co-creation.” 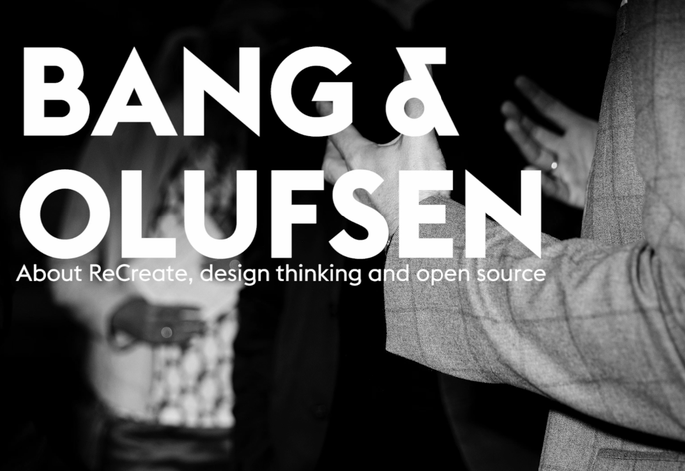 In addition to being an exciting and innovative product, ReCreate is also a perfect example of an open-source hardware business model, where Bang & Olufsen experiments with building a community of co-creators who contribute ideas, engineering skills and, not least, innovation power; an independent community that potentially represents far greater value than the potential turnover of selling ReCreate as a traditional product.

To get started modifying the BeoCreate yourself, find the source code on the official BeoCreate Github, and find the documentation here.