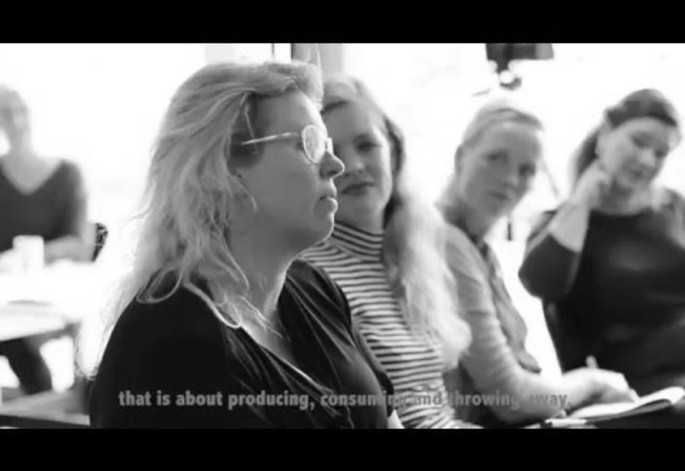 The workshop ran over the course of three hours and had participation from 15 invited entrepreneurs, business leaders, representatives from public organisations, designers and experts within new fabrication technologies. The program was initiated by presentations by two of the participants; Hanne Juel, who is the leader of the Circular Economy Team in Region Midtjylland (Central Denmark Region) and Jonas Ørts Holm, Business Project Lead from Væksthus Sjælland (Sealand Regional Incubator). Their thoughts kicked off an intense workshop flow with discussions, brainstorming and idea development. The dialog not only went to the overall topic of the day – can design and new technology revitalize production in rural areas – but also a series of derivative questions such as how design can and should be used in this context, whether we can build strategically on existing local resources (for instance by using concepts from circular economy) and last, but not least, where the potential of new fabrication technology exist in a Danish context. That you can hear more about in the video above. But why are these questions important?

Challenges in areas outside major cities

In recent centuries we’ve seen a major outsourcing of production work from Denmark to foreign countries. This has not only put pressure on the Danish job market but also increasingly created the general understanding that we should invest in production to a lesser degree because the costs of manufacturing here are too high. Moreover, we are also currently facing an intense urbanisation tendency, where Danes – especially the younger generations – are moving to the larger cities and thereby challenges not only the overall capacity of these cities, but also the rest of the country, which is losing its talent mass. This has created a large political focus on securing that business not only flourishes in the major cities – but that we pursue growth in all of Denmark.

At the same time, we are seeing a new tendency take shape across the globe where Fablabs, maker- and hackerspaces are emerging in thousands of cities, and are creating frameworks for entrepreneurs and giving citizens easy access to brand new technologies such as 3D-printers, CNC-mills and laser cutters. These technologies are being used to create new ideas, prototypes and increasingly also products, which it was previously impossible to make without making substantial investments in expensive machinery. This movement is furthermore built on new creative concepts such a strong do-it-yourself philosophy, open source knowledge sharing and a whole new approach towards the very idea of manufacturing, which isn’t necessarily aiming towards setting up mass production in distant countries, but instead to tailor products and services as well as produce based on local skill sets and materials – which can make sense from both an economic and environmental perspective. This movement is called “the Maker culture”.

New perspectives for the future

This has among other made us curious towards exploring whether the maker culture and associated new technologies and mindsets – coupled with strong design methods – can play a decisive role in revitalising production in all of Denmark as well as give entrepreneurs and existing manufacturing companies some brand new growth perspectives for the future. It is this topic that this first workshop under the Future Fabrication banner was focusing on, and which the participants were examining and over the course of the three hours came up with many important ideas for. You can see the mindmap which covers the many thoughts that were put on paper during the workshop.