In November Danish Design Centre held four workshops with invited people from all over Denmark as well as select speakers from both nationally and abroad. We asked these experts to help us brainstorm over a series of themes within our new work field, Future Fabrication, which examines Denmark’s future production potential. Workshop #2 asked the overall question: How can we design sustainable business models for manufacturing companies based on open source principles? 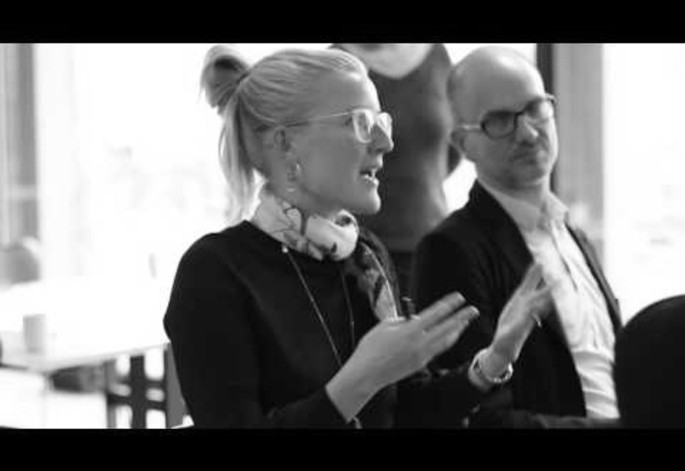 For this workshop, we had invited a broad array of professionals stretching across areas such as sharing economy, circular economy, business development, business counselling and technological research. They were furthermore joined by one of the biggest international experts in the field, Dr Peter Troxler from Rotterdam University of Applied Sciences, who has been researching open business models for several years and who also has a practical background from several production companies.

What is open source?

Let’s being by zooming out a bit and uncovering what open source really is and why it’s relevant to discuss when we address the future potential for manufacturing businesses in Denmark. The term has its origin in the software world in the late 1970’s, where an increasing number of software developers (and later on, also companies) started producing software where the source code was (and is) freely accessible for the general public to modify and reuse. This is contrary to the conventional software development model, which is still dominant, where developers protect their code and prohibit any sort of unauthorised modification.

The motivation behind open source is, on one hand, to create transparency and empower the end-user to fully control the product for which he or she has paid, but on the other hand also to inspire the end-user to make updates and improvements and share this back. This decentralised development model relies on the users to contribute actively to improve the product and gives the company a competitive edge because the open source license under which the product is offered stipulates that any updates must be released under the same open source terms.

As such the motivation is not just charitable, but just as much profitable, since the company can save expenses on staff and instead develop products in collaboration with a global network of programmers who become co-developers, and who at the same time benefit from their own work by being allowed to re-use their coding work for other projects. You can say that open source ensures that the companies and programmers stand on each other’s shoulders instead of competing – with profit for everyone involved and highly accelerated innovation as a bi-product.

That this is a good business is emphasised by the fact that these days multinational corporations such as Google, Microsoft and Apple are open sourcing their products at a high pace.

In recent years the principles of open source software development have begun to move into physical objects – and products. This new field is usually referred to as open source hardware and the underlying idea is simply that open sourcing technology, know-how and designs are highly profitable not only for virtual products. For instance, the large American technology company Tesla recently opened up a large number of patents on their electrical cars and invited the whole world to use the technology freely and thereby indirectly helping Tesla grow their already gigantic business.

The shift from being protective about your intellectual property to being open and making your product source code freely accessible is not easy, though – and for many businesses the open source mindset constitutes a big challenge. This is why open source is also often referred to as a very disruptive.

We hope, however, to help diminish the learning curve with the Future Fabrication program by initiating concrete initiatives that will make it easier for Danish companies (and companies worldwide) to dive into building open source business models around their products.

The workshop took a point of departure in these very potentials and challenges. We started with a presentation from Peter Troxler who gave an overview of international developments in the field and explained the dynamics of open source business models. He was followed by Magnus Christenson from Socialsquare, who among other things helps businesses make use of open source licenses. Magnus highlighted how going open source, on one hand, enables you to create large communities around your products as well as build new international markets and ensuring higher degrees of customer loyalty – but also, on the other hand, helps you accelerate innovation processes and stimulate creativity in the development of your products by involving users directly.

On a side note: Socialsquare has made a 4-minute LEGO stop-motion video which briefly sketches out what open source is and what strengths it carries with it – see it here.

Can we change scepticism to curiosity?

Through discussion during the workshop, it became clear that the participants in each of their networks are experiencing lots of curiosity towards open source principles in business contexts, but also that there is a lot of insecurity and scepticism towards the sustainability of basing your business on open source principles. This first and foremost comes from a general lack of deeper knowledge about the topic, although this is usually overshadowed by a strong willingness to learn. This could, for instance, come from following international cases and this was one of the concrete takeaways from the workshop: Namely that it would be highly useful if it was easier to find inspiration and access information about such concrete business cases. Having access to an overview of different models and their application could help Danish businesses gain a better understanding of the principles and their potential as well as entice them towards experimenting more and explore the opportunities offered in their particular context and field. More generally this could also help Denmark move forward ahead of the curve rather than lacking behind.

Through a series of design practices, the participants were taken through a brainstorming phase where they were asked to write down their thoughts, visions and ideas around open source business models. More concretely they were asked to come up with concepts for concrete projects which they would like to see taken into action and which they could imagine being feasible through the combined efforts of the participants, Danish Design Centre and other interested parties. The result of that brainstorm can be browser in the following mindmap that visualises the many strands of thought that came forward.

As it appears there are some very concrete projects but also some more abstract ideas which the Future Fabrication program can hopefully become the arena for exploring further. One example is the idea of mapping existing insights, knowledge and cases, both nationally and abroad, so that curious businesses and entrepreneurs can learn from it and subsequently initiate either full-scale or pilot initiatives around open source business models on their own. Another example is the idea to create courses and training which would help those businesses translate open source principles into their specific context.

One more interesting and a rather dominant train of thought from the mindmap is the need for policy work and the desire to try to get political traction in, for instance, the Danish Ministry of Business as well as in influential organizations such as DI (Confederation of Danish Industry) to explore more systematically what open source principles can bring to Danish business and Danish society in general. This could happen, for instance, through thoroughly analysing its implications on the value chains of the Danish production sector and through pushing for clearer regulation around intellectual property – as well as an exploration of the actual economic potential for different business fields.

The discussions could have continued way beyond the 3 hours that we had. But the workshop was not the end of our shared exploration of this topic – on the contrary, it’s the kick-off. The goal of this workshop series is – in collaboration with our network – to conceptualise a 3-year program which will actively strengthen Danish production companies’ opportunities for increased growth as well as their ability to create innovative products and solutions.

Based on the workshop brainstorms and feedback we will now commence with planning concrete Future Fabrication activities for 2016 and beyond, and hereby invite all readers of this blog post to get in touch and contribute to our thought process. You can do this by contacting Julie Hjort and Christian Villum on jhj@ddc.dk and cvi@ddc.dk respectively, or through dialogue on social media using the hashtag #FutureFab.

In coming blog posts we’ll report from workshop #3 and #4, which took place in the same week. You can also read about workshop #1 and furthermore read more about the background behind our themes on the project page for Future Fabrication.